Post your first assignment by replying to this topic

Remember that this topic is in a public space, so if you’d like to share a draft for feedback before posting here, go to the relevant private discussion space for your course

3 posts were split to a new topic: Where is the assignment?

I have a 3 grids of camera traps in 3 adjacent pastoral/wildlife conservancies. We sort the data into conservancies, “seasons” of data (not correlated to actual season, has more to do with field seasons), cameras, and camera checks. I just used a small subset of my data for this assignment. I’m looking at 1 conservancy, season 6, for spotted hyena observations. I also made 14-day bins instead of 5 day bins for faster data sorting, but in the future I think I’ll want smaller windows.

Zanet et al. 2017 apply occupancy models to investigate whether altitudinal range influenced the detectability of gastro-intestinal parasites among Alpine marmots (Marmota marmota). Those researchers hypothesized that marmots inhabiting environments located at higher altitudes carried reduced abundance (i.e., mean number of parasites per host within a population) of parasites and used parasite detectability as a proxy. Here, they confirmed this association and concluded that parasite abundance decreases with the increase of altitude where marmots live.

To know more about this research using occupancy models check the link below:
Higher risk of gastrointestinal parasite infection at lower elevation suggests possible constraints in the distributional niche of Alpine marmots | PLOS ONE 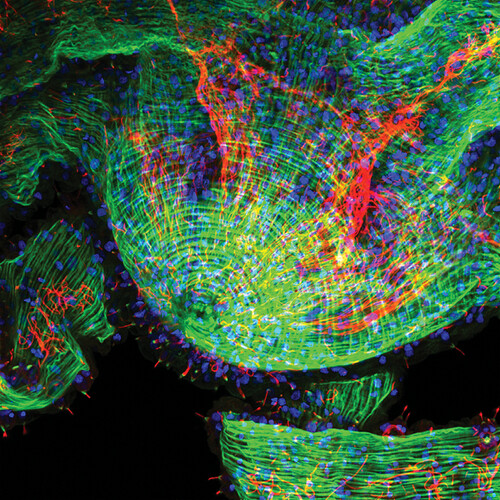 The shrinking ark: patterns of large mammal extinctions in India |...

Mammal extinctions are widespread globally, with South Asian species being most threatened. We examine local extinctions of 25 mammals in India. We use historical records to obtain a set of locations at which each species was known to have been...

Field Method: The entire study area (~ 5000 km2) was divided into 70 sampling units (grid-cells) of 10 km x 10 km (100 km2) each. Each grid was then surveyed four times during the winter season (November-March, 2022) for the detection/ non-detection of the threatened raptors (Eagles and Vultures like Egyptian Vulture, Steppe Sagle, Griffon Vulture and Himalayan Vulture and others) and the data was arranged as per the format of detection/ non-detection i.e. 1 and 0 (screen shot attached). 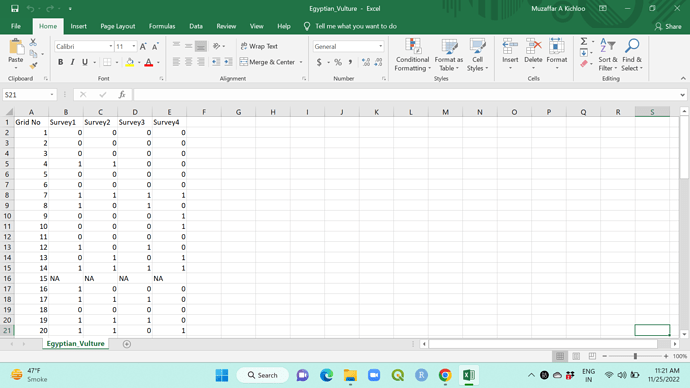 my-conservation-work
As I said in another discussion I am at the initial phase of designing a study on tonle sap water snakes (Homalopsis sp.)
Assessing the area occupied by tonle sap water snake to understand the needs of this specie and repeating the occupancy study in different seasons and years to undesrand those needs in relation with the drastic change between rainy season and dry season.

This paper presents a single-season occupancy model for seven species of lemur in Madagascar. The goal of the study is to estimate probabilities of detection and occupancy as it relates to various forest disturbances. Their model includes different forest types (undisturbed, logged, bamboo), distance to forest edge, and distance to villages. They also model the effects of introduced predators (dogs) on occupancy and detection probabilities. The number of observations of each species was very variable, with only one observation recorded for one species. For the other six species, between 6 and 18 observations were recorded, and the researchers were able to estimate occupancy for those species. Forest type was shown to be an important variable predicting occupancy for three species, and dogs were an important factor for two species.
This paper seemed like a good example of a relatively straightforward occupancy model. Having gone through only the first module of this course, I was still able to understand most of this study. Here’s a link!

@LucyTallents this is supposed to be tagged research-paper but I can’t figure out how to add a tag to a post!

research-paper
This paper was released in 2014 (Guillera-Arroita et al.) as a response to WLD’s paper (Welsh, Lindenmayer, and Donnelly, 2013), which questioned the efficacy of models that estimate species occupancy while accounting for detectability. As a result, Guillera-Arroita and colleagues showed the risks of disregarding imprecise detection, and that the results of WLD would be valid only in cases of extreme heterogeneity, as they initially expected.
Therefore, when ignored, occupancy and detection are confounded: the same naïve occupancy estimates might be achieved for very different true levels of occupancy, making the extent of the bias unknown. Hierarchical occupancy models separate occupancy and detection, and imprecise estimates merely suggest that additional data are needed. Instead, the goal should be to improve estimation by minimizing the impact of these issues throughout the planning, data collecting, and analysis, ensuring that the proper amount of data is collected and model assumptions are met.

I chose this article because it helped me recall the theory I worked on this week as I read it. Even if after the first reading I still didn’t grasp everything, I now have a lot better understanding of the topic than if I had approached it without a theoretical foundation.

Ignoring Imperfect Detection in Biological Surveys Is Dangerous: A Response to ‘Fitting and Interpreting Occupancy Models’

A paper released in 2016 (Rosemary et al., 2016) examined whether the persistence of small mammals in complex habitats could indicate a large-scale habitat preference by cats whereby cats occupy complex habitats less. On the other hand, it wanted to understand if prey might persist in such habitats despite the presence of cats, due to the availability of refuges that allow them to avoid predation, or for other reasons. The study which was conducted on Mornington Wildlife Sanctuary and Charnley River-Artesian Range Wildlife Sanctuary in Australia, between August 2011 and May 2014, used two camera traps arrays in each site, where one array was deployed in a topographically complex rocky range and another in adjacent open plains. The plan was to use occupancy modelling to examine how location and habitat complexity related to cat occupancy in the Kimberley landscape.

Results showed that, in both the north and central Kimberley, feral cats occupied topographically complex habitats considerably less than adjacent open plains. Besides that, they found out that the diversity and abundance of mammals are high in topographically complex regions of the north Kimberley, and for many small mammal species this is one of the last places they persist on mainland Australia. This study is important when deciding on conservation actions such as choosing sites for small mammal reintroductions, which has more chances to be successful if variation in cat occupancy with landscape features is taken into account.

Occupancy of the Invasive Feral Cat Varies with Habitat Complexity

research-paper
Lea A. Randall et all. 2015 explores temporal patterns of occupancy and underlying extinction and colonization dynamics in a regionally imperiled amphibian species, the Northern leopard frog (Lithobates pipiens ) in Alberta. The primary advantage of the study is its wide geographic scale (60,000 km2) and the use of repeat visual surveys each spring and summer from 2009–2013. The occupancy varied more dramatically between seasons than years, with low spring and higher summer occupancy.
So climate is the variable of the occupancy of the Northern leopard frog.
For more information, please click the link: Seasonal Differences in Extinction and Colonization Drive Occupancy Dynamics of an Imperilled Amphibian | PLOS ONE

my-conservation-work
We are in a protected area in northern Cameroon, a Sudano-Sahelian savannah zone. Many methods are used to determine the abundance of wildlife populations. At the same time, these methods allow us to highlight the occupation of certain species. These methods include line transects in the grids, aerial surveys in the strips and camera traps. As far as the analysis of occupation is concerned, this method is rather expensive and it would be easier this time to couple this analysis with the anti-poaching surveillance patrols conducted in the park.

I am a research assistant and my work include monitoring of wildlife population, more specifically on lion population, I carry out this role by employing multiple techniques to maximize detectability of lions in the study area which is characterized with diverse habitats ranging from Open glass land, Riverine, forest and mountainous habitat. Due to raggedness of some areas which are not easily accessible by vehicle, therefore I collect data by conducting spoor survey, camera traps and occasional night call-ups. Sometimes we conclude that there are no lions in the area just because I haven’t detected any individual for that survey without even considering other factors that may affect detectability of the species. Thus, through this course I have learned a lot of concepts that will now be useful for my work and be able to conclude about the occupancy by taking into consideration other factors that may affect detectability, also I have learned ways that can be executed to maximize detectability such as conducting repeatedly survey in multiple sites and try to measure probability of specie detection during different seasons

This course is useful for me because everything have discussed here align with my roles, thus, being conversant with this model, I will be able to maximize data collection, to be confident that the area is or is not occupied by the species of interest as well as knowing different factors that influence species distribution, habitat use and resource selections that are of great important in conservation of wildlife species as whole and in other hand the information will be useful to influence decision making and policy formulation

I have occurrence/non-detection and density variation data for two Amazonian frogs. These are territorial and diurnal frogs that live alongside small streams in dense ombrophilous rain forests.

I looked for them only once per plot in a single season, but I sampled at least three streams by catchment. Therefore, my repetitions are spatially distributed.

To reduce bias in density data, I counted only one frog per subplot when they were present, and the maximum abundance per plot was 25. The frogs are easily detected throughout the reproductive (rain) season, but I also used a playback with their respective calls to minimize false absences, as they call back when a male get close to other male territory.

To investigate how environmental factors influence the geographic boundaries and occurrence patterns I will use landscape-scale variables, such as vegetation cover/biomass, soil physical and chemical properties, climatic variation and topographic characteristics.

To understand whether their densities vary in response to site-scale environmental variation I will use pH and discharge of streams and canopy openness and the density of the other species, as they use to cooccurring in some portions of their distributions.

I have a question: Should I use the mean of the predictor variables per catchment?