Post your third assignment by replying to this topic

To do so, the authors collected nine different measures of human disturbance and used a PCA to reduce its dimentions before adding the PCA’s first axis (PC1), which explains 50% of the data variance, as an explanatory variable in their models. As observed in the table below, the best models for both bird species considers PC1 as a covariable. This can be observed by the lower value of AIC and higher value of Akaike weight presented in both models compared to the other occupancy models the researchers ran.

The AIC output suggests that the addition of the PC1 (i.e., human disturbance data) adds more support to the models (i.e., increases the likelihood the models reflect reality).

To know more about this research, read the article at the link below: 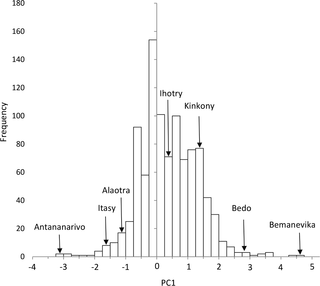 Profound and pervasive degradation of Madagascar’s freshwater wetlands and...

Reflecting a global trend, freshwater wetlands in Madagascar have received little conservation or research attention. Madagascar is a global conservation priority due to its high level of species endemism but most work has focused on protecting...

Playing around with some of my covariates, the null model was the best fit so far… It might be that my covariates are just too course to be good predictors? Or maybe for this site Hyena occupancy is just very high across the board? I plan to collect some more fine-grain covariates from satellite imagery, so once I add that in along with cattle presence we will see how that impacts the AIC estimates.

The closest model after Null (which wasn’t a terrible fit judging from the delta) is a model including whether cameras were in a special fenced area called “Naretoi”, where cattle are excluded and lots of prey species like to congregate. It’s not a surprise to see that increases the occupancy for Hyenas, as I see them in Naretoi quite a bit. 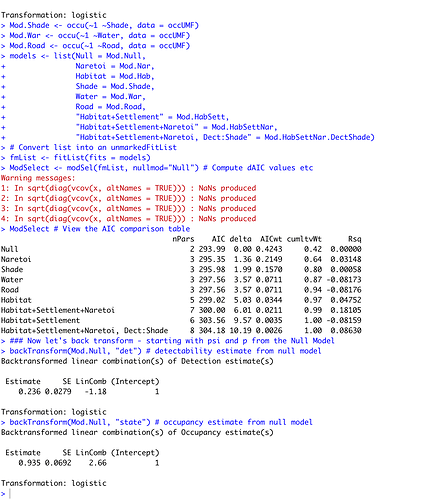 I’ve ran many different combinations using occupancy and detectability variables. The best model was the one that included only Distance from Protected Areas as occupancy covariates. However, some models with dAIC lower than three included models considering Tree Cover as a detection covariate. This model was the 5th best one and included as occupancy covariates distance from Protected Areas (posivitvely influence occupancy) and Palm Oil presence/abscence (negatively influeced occupancy), and Tree Cover influence positively detectability, probably not because it is easier to see cloud leopards in areas of dense vegetation, but if you want to see these animals you must go to preserved areas that still have trees.
Conservation conclusion: protected areas are fundamental if we want to conserve cloud leopards, because these areas may have suitable habitats (e.g., forests/trees) to support cloud leopards populations, differently from Palm Oil plantations that may be unsuitable for them. 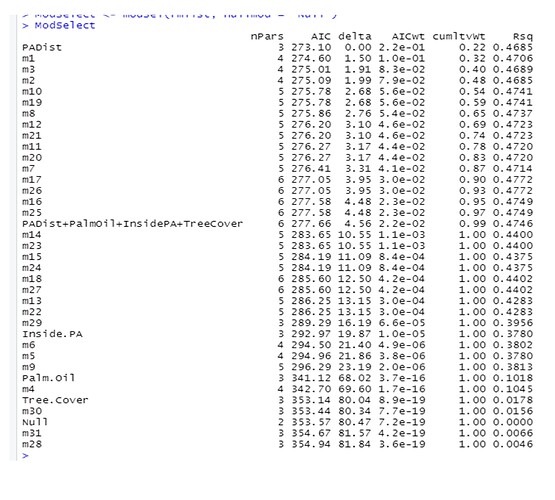 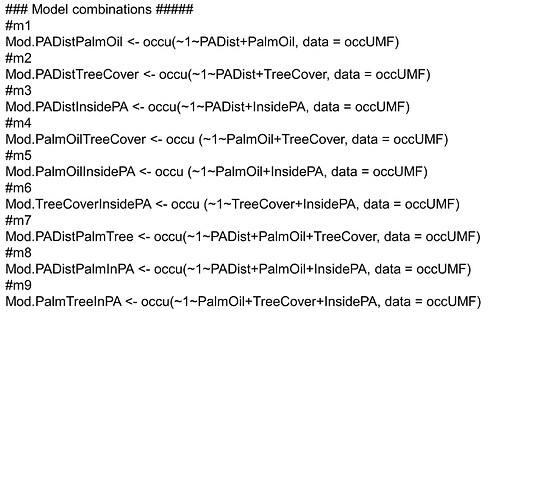 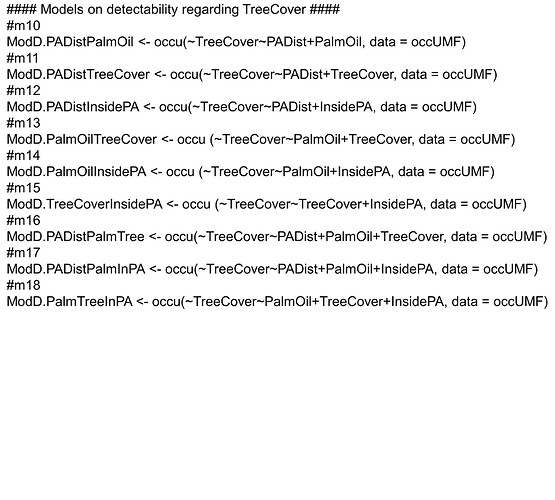 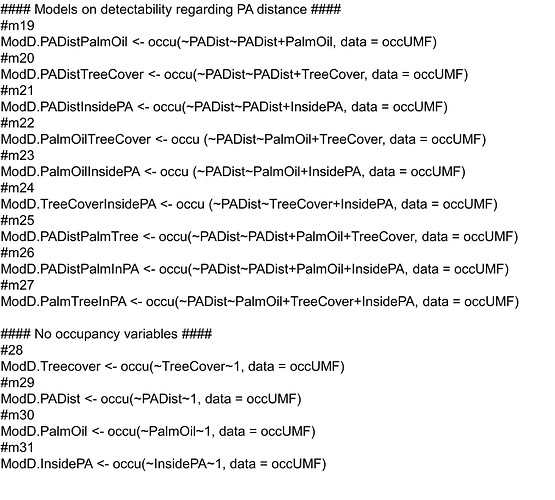 A paper released in 2016 (Rosemary et al., 2016) examined how location and habitat complexity related to Feral cat occupancy in the Kimberley landscape. The study, which was conducted in Australia, used camera traps in two arrays, where one was deployed in a topographically complex rocky range and another in adjacent open plains.
The model that best described the occupancy of cats included the variables’ location and topographic complexity and had DeltaAIC equal to zero and an Akaike weight of 0.9, which means it was the model which was the closest to reality.

Occupancy of the Invasive Feral Cat Varies with Habitat Complexity

explain-concept
Covariates are variables that affect a desired outcome. In effect they explain or predict a phenomenon. We can say that any response phenomenon is dependent on a variable that can be explained or predicted.
For example, if we want to know the occupancy of buffalo cob in the vicinity of a national park, this can be explained by the presence or availability of water points (explanatory variable) and also the area occupied by transhumant herders (predictive variable) can affect the occupancy of one of the species.
In the first model (1), we see how detection increases with proximity to the river
And the second (2) defines the probability of occupancy which decreases as a function of the area occupied by the pasture 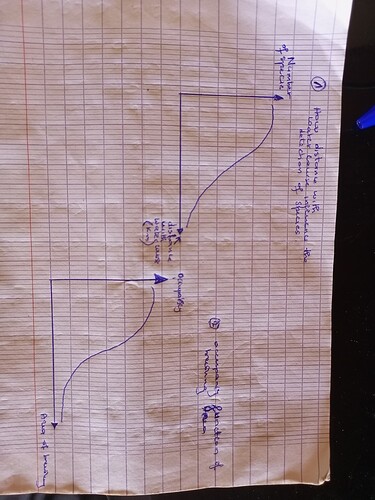 research-paper
In this 2012 paper, Harihar and Pandav used survey data from 2009–2010 to create a spatially explicit tiger occupancy model. They built it on prior knowledge of tiger biology and specific issues that impact the 6,979 km2 western Terai Arc Landscape (TAL), which is divided into two disjunct parts (Tiger Habitat Blocks; THBs). In 32 of the 57 cells they surveyed, they found tiger signs on 611 one-kilometer segments, yielding a naive occupancy estimate of 0.56.

Their research has helped in pinpointing regions with significant tiger occupancy both inside and outside of currently established protected zones. Models that included the interaction between the availability of wild prey (AIC w = 0.883), anthropogenic disturbances (AIC w = 0.742), and habitat blocks (AIC w = 0.143) provided the best explanation for the current patterns of occupancy.

Despite the fact that the overall tiger occupancy was 0.588 (SE 0.071), their findings show that the loss of a regional corridor’s functionality has led to tigers currently occupying 17.58% of the available habitat in THB I as opposed to 88.5% in THB II. 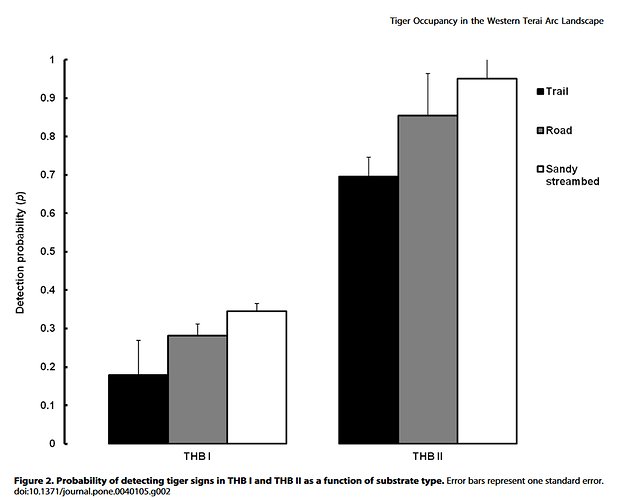 Influence of Connectivity, Wild Prey and Disturbance on Occupancy of Tigers in the Human-Dominated Western Terai Arc Landscape

#clouded-leopard
In addition to Null model, I ran eight additional models using different combinations of covariates successfully. Attached below is a screenshot of the R console showing results. 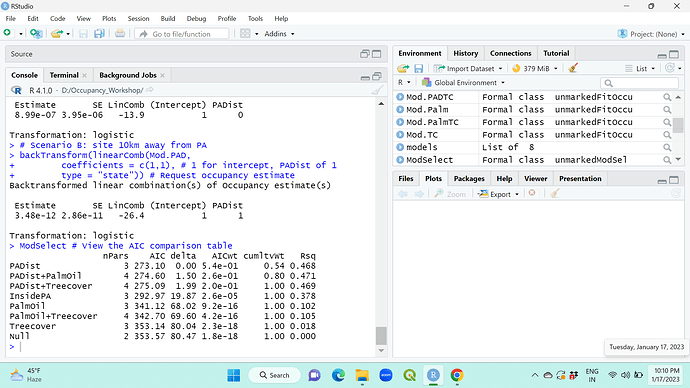 This is a great way to illustrate the concept of covariates, and I really like your example of transhumant herders affecting the occupancy of buffalo cob

Regarding your example of proximity to the river, do you mean that buffalo are easier to spot close to the river (detectability), or that they use the area beside the river more often (occupancy)?

Hello Lucy
happy new year sorry for the late replies but I was in the bush outside.
Indeed, as for the example with the proximity of the watercourses, especially in the dry season as there are not many of them, the majority of the species go there in search of water so it is easier to detect them there and the occupation is strong

So their higher density nearer to water increases their detectability. Regarding occupancy, it sounds like in your example there is a seasonal change in occupancy and its determinants:

Remember that the closure assumption assumes that occupancy remains constant within each site throughout your data collection ‘season’, so if you think there may be seasonal changes in spatial distribution, you need to confine your surveys to within a single weather season, and potentially do a multi-season study. Although I know this is just a theoretical example!

okay that’s well noted, thanks for the clarification