Submit your GIS beginners Module 4 assignment by replying to this post. Remember to include:

You also need to offer feedback to your fellow learners. Reply to someone with: 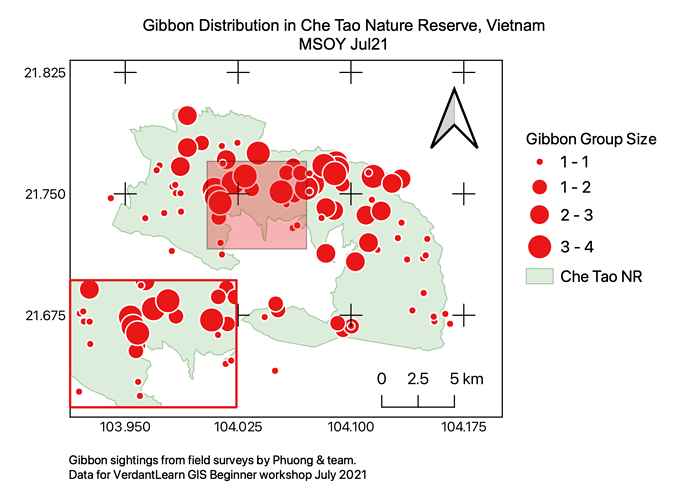 Wow today’s assignment was more challenging than the rest. I redid my maps several times but I think I still did something wrong as I cannot change my legend info (i.e. it’s still appearing as 1-1, 1-2 etc…). Anyone else had the same problem? 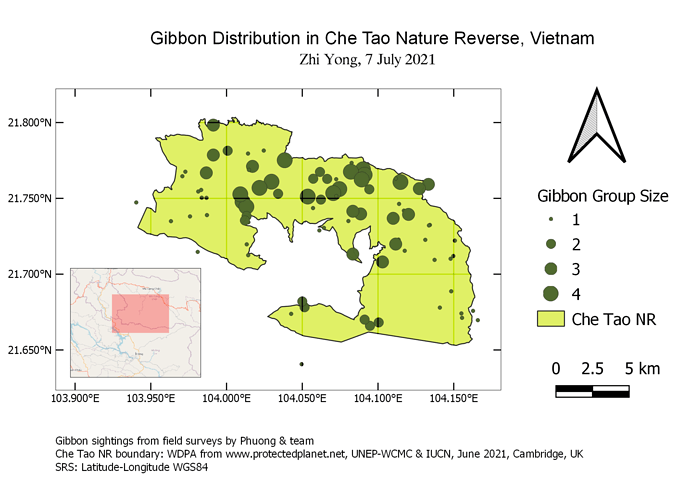 This is my map look for today work. I have included one extra map showing the zooming of the nature reserve from map of Vietnam. Anyone encounter the problem during the symbology stage which the data is classified into interval (1-2,2-3,3-4) instead of single integer when classifying the group size (Mode: Equal Count(Quantile). Just wanna ask any methods to classify the data in single integer instead of making them into interval although the data for this Gibbon data is still not effected by the interval?

@MichSoo I managed to change this information from the caption, when you double click on each info, you can edit the text. I hope this helps.

Great module. Here is my work. I tried to include a second map showing the Vietnam reserve location, and I was even able to do that and include a rectangle highlighting the area, but I had a lot of trouble locking the layers so they wouldn’t change on the main map. As I didn’t get a satisfactory result, I chose not to include it in the final work, but I’m still working to find out how to do it. 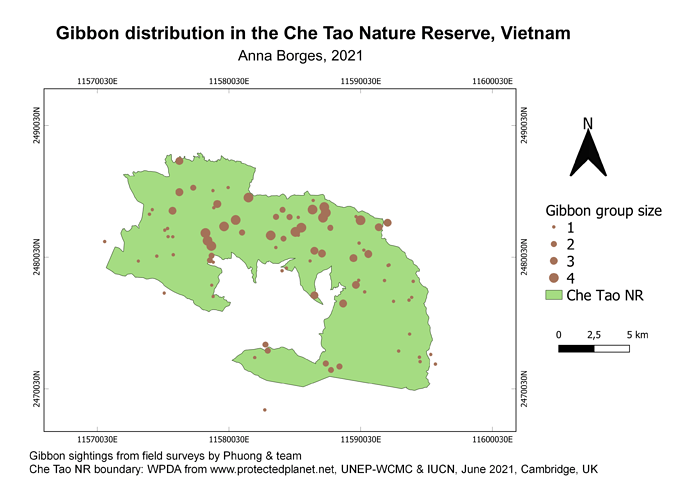 And here is the evidence of my work. I really enjoyed this module, very challenging and lots of things to learn. Thank you very much. 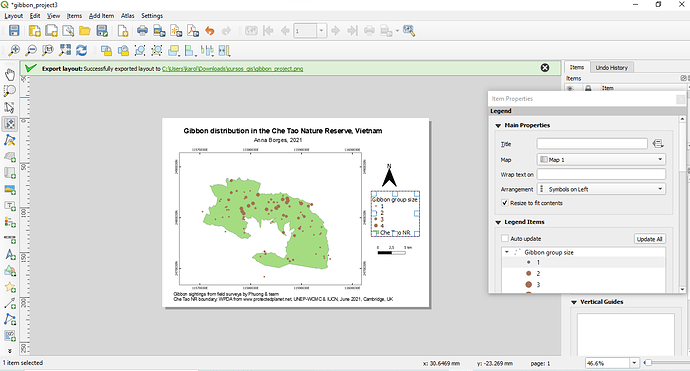 What a great job! I tried to include the second map like you did, and I can include it and highlight it and everything, but I couldn’t make the layers of the first map not change when I was switching to the second map. I assume it’s something very simple, I’ll keep trying. Again, your work is great. 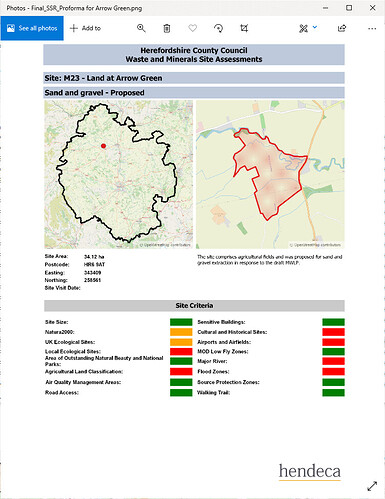 image751×975 162 KB
Something a little different this time - an example of a map that puts more emphasis on the attribute data laying behind the GIS layers rather than the detail of the map itself (and shows how conditional formating of text/labels can provide more information than just the map itself.
So in QGIS, a layout was created for an A4 page in “portrait” orientation
Two “Map Elements” were added, one to show the overall study area (the county of Herefordshire in England) and the other to show the site boundary.
Each map element was set to a different scale, and the “scale visibility” of the layers in the main QGIS map were set so that the “red dot” for the site location was only visible at scales above 1:100,000 while the site boundary layer was only visible for scales below 1:100,000 (so you dont get the red dot in the detailed map and you dontget the site boundary in the overview map.
Text boxes (labels) were added to display basic attibute information from the Site boundary layer
Additional text boxes were added for other site based attibutes held in the GIS layer, but these were set to be colour coded (Red, Orange, Green) depending on the value in the attibute table.
The “Map Atlas” function was used to generate over 100 of these A4 Sheets, 1 sheet for each of the 100 sites which gave the attibute data for the detailed assessment of each of the sites.

All this accomplished in one QGIS map layout.

Excellent map. Really good how you have used an inset to try and show more detail for one part of the map (although the size of the inset is not that much bigger than the area it covers on the main map).
There is a QGIS function that merges “dots” when they are close together (“point cluster” optioni in the symbolisation categorisation choice) and gives a count to the number of dots in that area, so you could use this on the main map, then show the true location on the inset where more detail is needed. 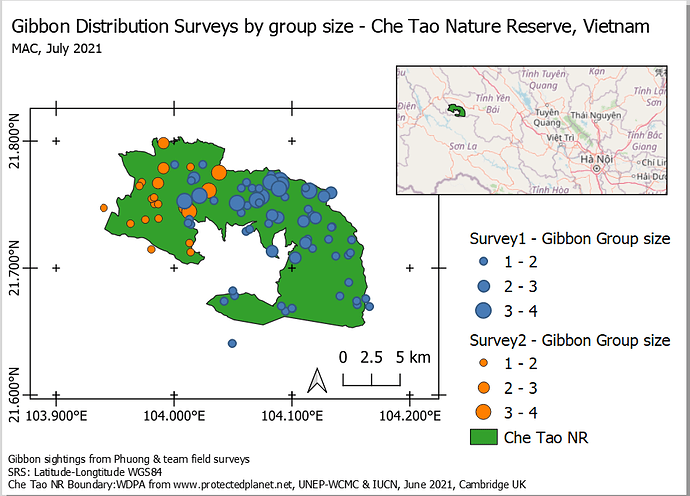 I found this a little bit of a challenge as it took a little while to get everything working as I wanted and getting to grips with all the options but got there in the end.

One issue I did have was I really struggled with inserting a second map as they kept refreshing and altering what was in the original one even if I locked them - it would be good to know if there is a better way to do this than the way I found - any suggestions welcome.

Hi! Despite that your map is very appealing!
To sort it out, in the symbology you should double click on categories, so you can adjust the interval and legend what will be written out too.
Best wishes,
Borbála

Love the way you have zoomed in rather than out. 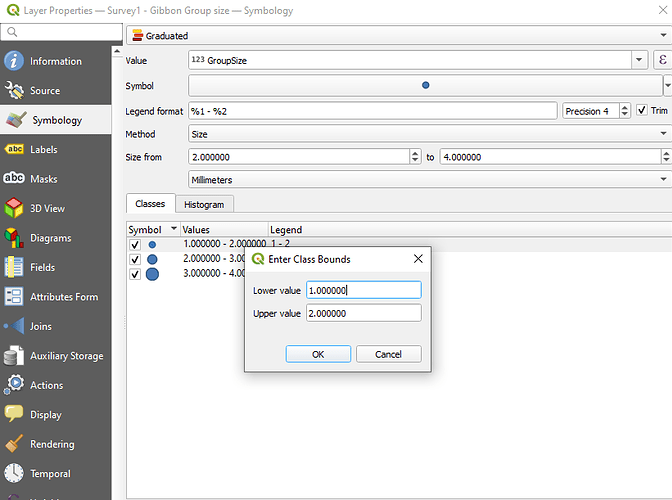 Perhaps u can just remain the layers of the first map unchanged by clicking lock layers and layer style for layers under the item properties. And also do remember to lock the first map when try to map the 2nd map. Hope this help you! Thank you 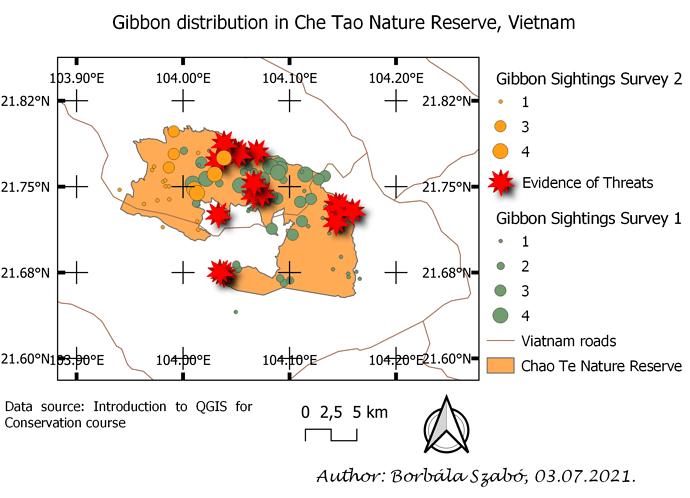 Great map - Good editing of the legend and inclusion of an inset “overview map” to show more of where the area of study is. 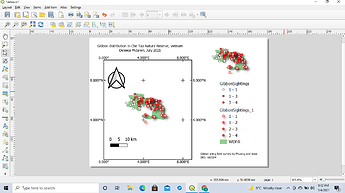 I struggled with this one, I was confused with the instructions (I spent alot of time working on a blank document as it initially suggests aahahah). In particular the grid part for some reason mine would not insert the X,Y coordinates, can anyone help me with this?. I managed just about everything else, so I am not totally disappointed with myself.

OOOo i like how you have used solid lines but changed the transparency so as not to over power the map from the for front, simple yet effective. I am not sure about the second map, not to sure if its just the screen shot, but its hard to pin point where in the world that is from a glance, maybe a label??. I am impressed everyone managed the input of the correct grid x,y refs, I couldn’t work it out no matter what I tried it wouldn’t change

This is really good, thanks for sharing, gives something for a newbie to aspire to achieve. We are like kids with wax crayons, whilst you got the nice felt tips ahahah

Nice work. I like how you put the inset and the choice of colours. 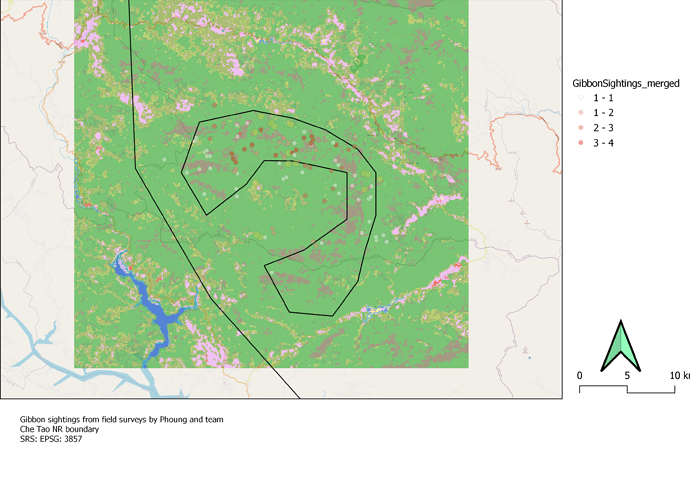 asfafd3507×2480 1.74 MB
Today’s challenge is the somewhat more difficult. But it is a good lesson as I have never learned how to print out in QGIS and use snip tools to capture my own screen and use powerpoint to label thing. This tool is so much more useful. However, I still couldn’t figure out the grid lines. I will need to go back and try on another set of maps.
1 Like
mamushmiss 4 July 2021 16:54 #22 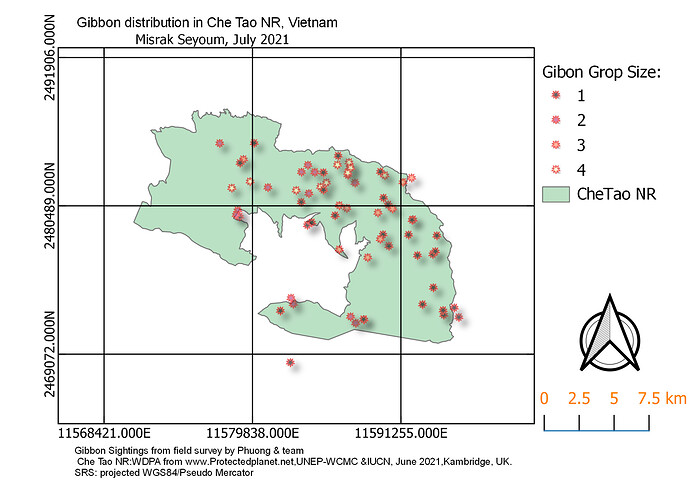 The message/purpose of my assignment map is “to show my community forum readers sightings of Gibbon & their distribution within Che Tao NR boundary with the help of the GIS basics I’ve learnt from modules 1-4”.
This module 4 is a bit grippy, in a positive way, from start to finish. The freedom we were given to choose the layers, grids. grid intervals, SRSs with its own consequences was interesting.
Figuring out what to convey to my audiences through my map / the map message or map purpose/ for me was the integral part in the process of making a map. it tells me that I shouldn’t add every thing in to my map for very reason that I have them. I am still not clear as to how I create my own vector layer that represent a specific project site/area/ in the real world using my own field datasets like the Che Tao NR boundary we downloaded and added to QGIS project as layer. Any one with the solution please?